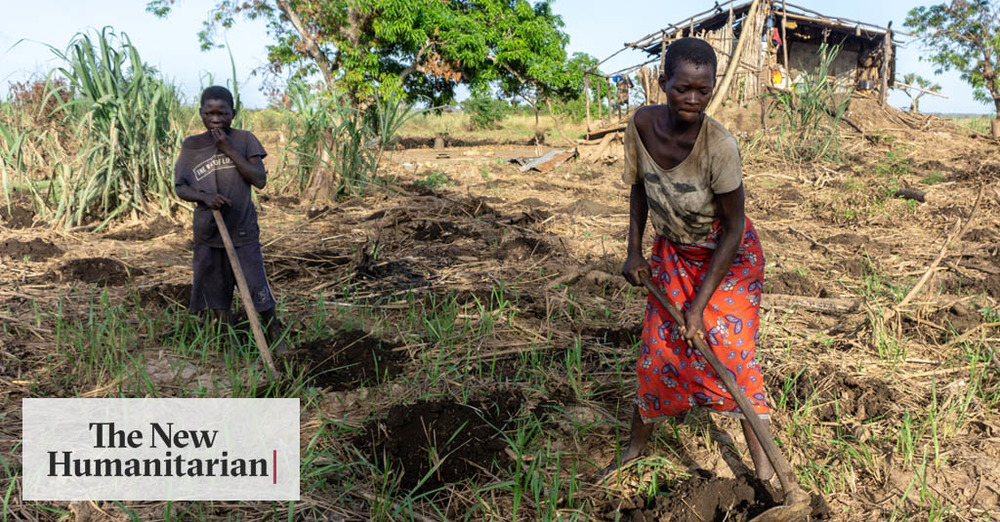 Last week, four villages affected by the storm in the Cabo Delgado districts of Macomia and Meluco were attacked, and at least seven people were killed. The violence was reportedly linked to upcoming registration for the October elections, but it also impacted aid efforts.

Despite abundant natural resources, the area – home to much of Mozambique’s minority Muslim population – is poor, with high youth unemployment, and already faced significant humanitarian needs before the storm.

“Our key priority is to support people in need, and our operations will continue,” said Gerald Bourke, a spokesman for the World Food Programme, which delivered supplies to more than 10,000 people after one attack in Nacate, a village 15 kilometers from Macomia town. The UN aid agency is also investigating an attempted raid at a food warehouse, although the facility did not belong to WFP.

“I farm cassava and maize, but when I came back home, there was nothing left in the fields; it was all flooded by the water.”

Cyclone Kenneth made landfall on 26 April with winds of up to 140 miles (220 kilometres) per hour, killing more than 50 people in northern Mozambique and the Comoros Islands. It hit six weeks after Cyclone Idai came ashore further south in Mozambique, killing 1,000 people across the wider region, including hundreds in Zimbabwe and Malawi.

Since Kenneth, more than 3,500 people remain in shelters in Cabo Delgado and the neighbouring northern province of Nampula, with some 250,000 people affected and more than 45,000 houses destroyed or damaged. With aid access to many in the remote and conflict-prone area difficult, some have been left to fend for themselves.

“There was no one coming to help me and my family… so I had to do something,” said 30-year-old Sinani Shadique Siwale, whose home was turned to rubble in Macomia town, about 200 kilometres north of the provincial capital, Pemba. Siwale is now building a new mud house, but it may not withstand future storms.

Daw Mohamed, humanitarian director of CARE International, said the organisation planned to help at least 80,000 people over the next six months with tool kits and other equipment that could be used to build stronger structures.

“At the moment there are logistical challenges that have curtailed our efforts to reach the affected people,” Mohamed said. “Roads are impassable, and many bridges have been destroyed.”

For many families, hunger has been a constant worry. More than 55,000 hectares of food were affected just ahead of the April harvest, with crop losses leaving more than 370,000 people vulnerable.

Prone to droughts, the region has historically battled sporadic food shortages. Rapid deforestation has also made the country more vulnerable to flooding and climate change.

The UN’s Food and Agriculture Organisation is carrying out assessments in parts of Cabo Delgado where agriculture, as well as livestock and fisheries, suffered extensive damage in the two storms, according to Lisa Ratcliffe, a spokeswoman.

“I farm cassava and maize, but when I came back home, there was nothing left in the fields; it was all flooded by the water,” said Louisa Mafuca, 37, in Bangale 2 – a village near the Quirimbas National Park, which is known for its coastal forests, mangroves, and tortoises.

In other parts of Mozambique where the soil has dried, some rural farmers have returned.

“I don’t know if anything will grow right now as the soil still has a lot of water, but there is nothing else to do so I have to try.”

In Sofala province – the country’s breadbasket that was devastated by Cyclone Idai – more than 700,000 hectares of crops were destroyed before the harvest. Teresa Castigo, a mother of three, has tried to recoup her losses by replanting her maize crop in Batista-Mananga, some 150 kilometres northwest of the devastated port city of Beira. She hopes her family will have enough to survive until the next major planting season begins in October.

Luckily, small shoots of maize have started to burst through the soil.

“My husband is taking the last of our maize to the grinding mill, so I have to plant and see what happens,” she said. “Otherwise we will just wait and wait until we die of hunger.”

In a bid to keep her family’s hunger at bay, Sabina Joao Madibe – the wife of Siwale, who is rebuilding his house in Macomia – is considering going back to the fields to plant new crops. The family mainly eats beans gathered from the smaller garden in their yard, but Madibe is anxious to return to her larger fields.

“We can’t eat these beans all the time, (so) we have to do something to get food,” said the 28-year-old. “I don’t know if anything will grow right now as the soil still has a lot of water, but there is nothing else to do so I have to try.”

(*An earlier version of the story incorrectly stated that the attempted raid was at a WFP warehouse.)

(TOP PHOTO: The green shoots of maize in Teresa Castigo’s field give her hope, albeit an uncertain hope, that she might be able to grow something after Cyclone Idai destroyed her maize crop in Sofala province, central Mozambique.)

In a report released Tuesday, Human Rights Watch accused the Kenyan government of failing to properly handle a cash transfer program intended to help the poor during the COVID-19 pandemic. The rights group says the money instead went to people connect…

Police in the Democratic Republic of the Congo killed at least 55 people in April as part of a coordinated crackdown against a separatist religious group, according to a new Human Rights Watch (HRW) report released Tuesday. Bundu dia Kongo (BDK) leader Zacharie Badiengila, also known as Ne Muandu Nsemi, had previously called for his […]

Dryness persists in parts of Zimbabwe and Mozambique despite heavy rain and f ooding across southern Africa1. Heavy rainfall is forecast to continue over western Angola next week, increasing the risk for flooding.2. Matured desert locust swarms continu…