IAEA Ready to Undertake Verification and Monitoring in North Korea

Mr Amano provided an update on the modernisaton of the IAEA nuclear applications laboratories in Seibersdorf, near Vienna. The laboratories, which are unique in the UN system, assist the Agency’s 171 Member States in using nuclear techniques in a...
Read More
March 4, 2019 Web Desk General, News Comments Off on IAEA Ready to Undertake Verification and Monitoring in North Korea

IAEA Director General's Introductory Statement to the Board of Governors

(As prepared for delivery) Madam Chairperson, I will begin by welcoming Saint Lucia as a new Member State of the Agency. This brings our membership to 171 States. Nuclear Safety and Security Madam Chairperson, The Nuclear Safety Review 2019 presents pr...
Read More
March 4, 2019 Web Desk General, News Comments Off on IAEA Director General's Introductory Statement to the Board of Governors

IAEA Director General's Introductory Statement to the Board of Governors

(As prepared for delivery) Mr Chairman, I am pleased to welcome Grenada as a new Member State of the IAEA. This brings our membership to 170 countries. Mr Chairman, A number of important reports are on the agenda of this meeting. The Annual Report for ...
Read More
June 4, 2018 Web Desk General, News Comments Off on IAEA Director General's Introductory Statement to the Board of Governors 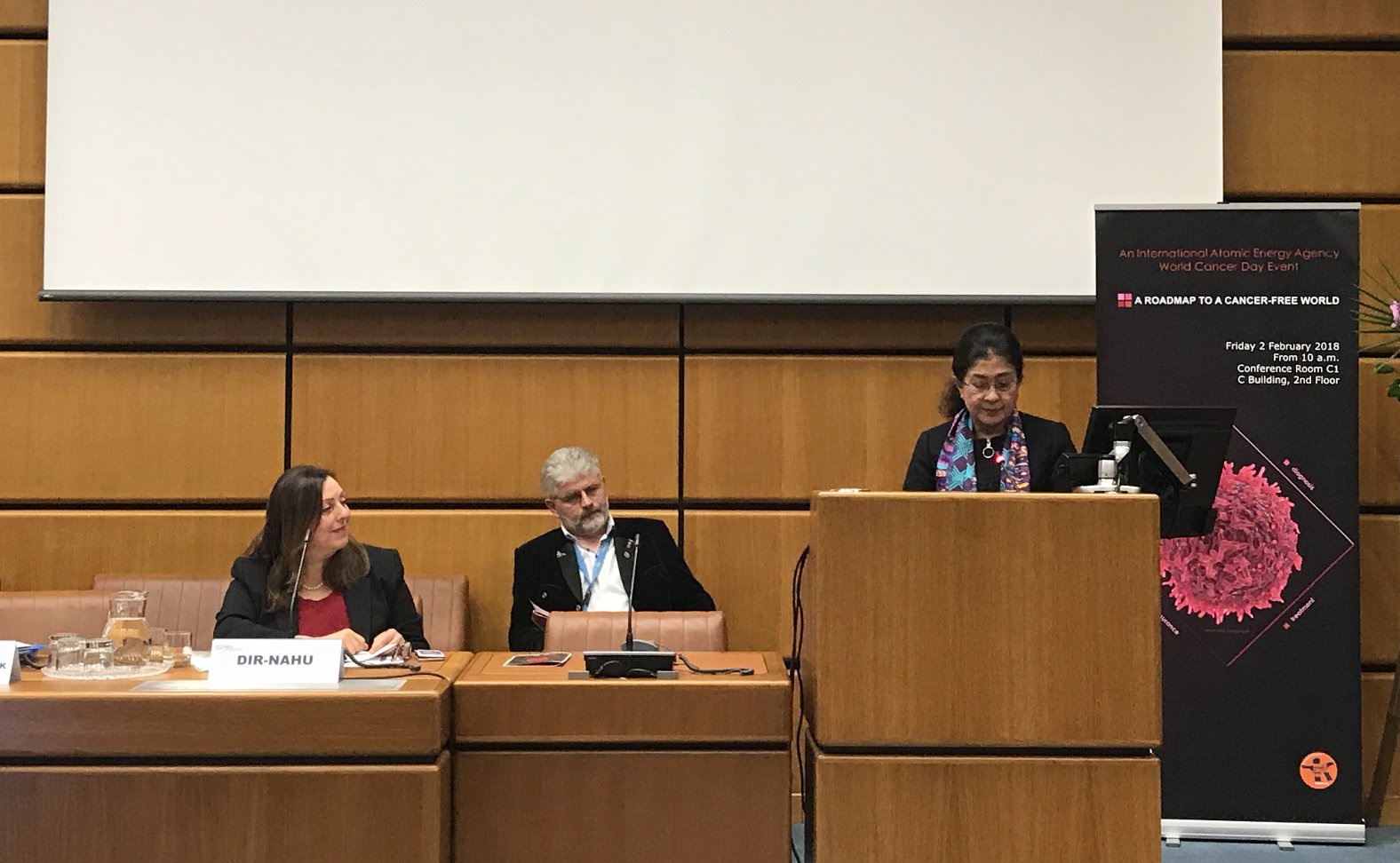 The IAEA is heavily involved in the fight against cancer through the application of nuclear techniques including radiotherapy, brachytherapy and diagnostic radiopharmaceuticals. These efforts contribute to the achievement of United Nations Sustainable Development Goal 3 (ensure healthy lives and promote well-being for all at all ages).

“Cancer care should be carried out comprehensively…we have incorporated a cancer control program into our national health system,” said keynote speaker Nila F. Moeloek, Indonesia’s Minister of Health. Sustainable collaboration and coordination with all stakeholders is key, she added.

Alan Jackson, Chair of the Continuous Update Panel on Nutrition and Cancer & Professor of Human Nutrition at the University of Southampton, United Kingdom talked about the role of nutrition and physical activity in the prevention and management of cancer.

“There are a range of opportunities that are being developed and promoted involving isotopic techniques in the prevention and treatment of cancer,” Jackson said. “There is an emerging international collaboration involving the link between nutrition and cancer.”

Joanna Kasznia-Brown, a UK radiologist and member of the International Committee of the Royal College of Radiologists, discussed the role of medical imaging in cancer management, including diagnosis and determining the treatment plan. “If we catch the cancer in its early stages, we can treat patients with much better results,” she said.

Mack Roach III, Professor of Radiation Oncology and Urology, Director, Particle Therapy Research Program & Outreach, Department of Radiation Oncology at the University of California-San Francisco, emphasized the importance of the multidisciplinary management of cancer, and in particular the role of radiotherapy.

“Radiotherapy continues to be one of the oldest, most effective and cost-effective treatments for cancer available today,” Roach said. Improvements in computers, imaging and material sciences have resulted in major advances in the accuracy and safety of radiotherapy, he added.

Jake Van Dyk, President of Medical Physics for World Benefit & Professor Emeritus of Oncology and Medical Biophysics, Western University, London, Ontario, Canada discussed the use of medical physics as an integral part of the path towards a cancer-free world.

“Medical physicists are important members of a radiotherapy team,” Van Dyk said. “They are critical for positive patient outcomes, and training of the next generation of medical physicists, radiation oncologist and radiation therapists is critical.”

“The IAEA has been instrumental in building capacity in radiotherapy in Africa, particularly through an African Regional Project on Radiotherapy,” Ndolovu said. “This project led to the creation of the African Radiation Oncology Network (AFRONET), a telemedicine initiative to improve the quality of clinical decisions and radiotherapy treatment, strengthen the education of medical residents and improve treatment outcomes.”

“The IAEA World Cancer Day event highlighted the importance of advances in radiation medicine in fighting cancer as well as nutrition for prevention and served as a bridge between science and policy,” said May Abdel-Wahab, Director of the IAEA’s Division of Human Health.

The event was livestreamed on our Facebook page. The recording is available here. 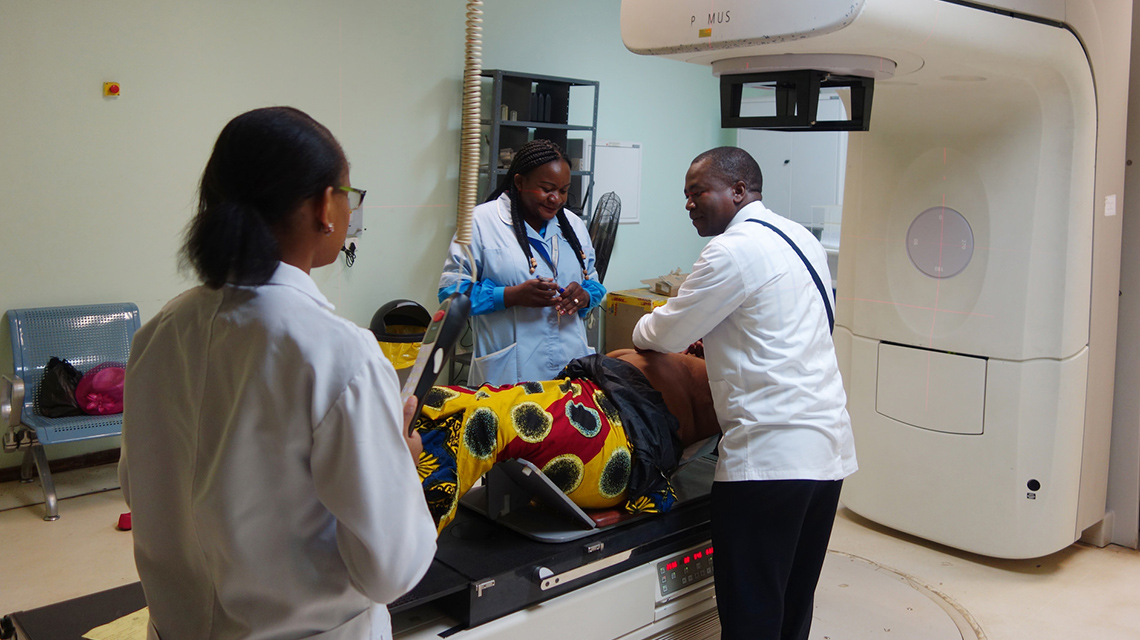 Lusaka, Zambia -- The wards may be full and the waiting times long, but at least the patients at the Cancer Diseases Hospital (CDH) in Lusaka, Zambia have a chance of surviving their illness.

Before the centre opened in July 2007, cancer sufferers who could not afford private care had two options: they either had to join a long waiting list for treatment in Zimbabwe or South Africa or, more often, they simply died.

The CDH is the first and only cancer treatment centre offering radiation therapy in this country of over 14 million people. In the past ten years, around 16 000 people have been diagnosed and treated at the hospital. The country has witnessed a three-fold increase in the number of cancer cases since the hospital opened. Seventy percent of cancer patients are women.

The IAEA, through its Technical Cooperation Programme, has supported the hospital since planning began in 2002.

Radiation medicine is a vital component of cancer control. Procedures such as X-rays, CT scans and mammograms are used for the early detection and diagnosis of cancer. Radiotherapy can treat and manage the disease and provide substantial pain relief for patients when cure is not possible.

Rebecca Siabwati received radiotherapy for cervical cancer at the CDH in 2010. The retiree now works voluntarily as a counsellor, encouraging women to be screened for cancer and supporting them before and after treatment. "In our community, there are a lot of myths," she said. "People just associate cancer with death, so they're afraid to come forward for screening."

"Sometimes they go to traditional African doctors, who give them herbs or medicines from trees. They even sell their cows and property to pay for this. But they're just wasting their money and time."

As part of her work, Siabwati attends gatherings in towns and rural areas where she informs women that cancer can be detected early and treated.

"At the hospital, I talk to patients. I give them hope. I tell them that I'm a cancer survivor, I'm not dead. If I survived, then there is hope for them too."

Rachel Mwale was treated for breast cancer, but the cancer spread to her lungs and she needs further treatment. "I felt very sad at first. I thought about my children. But now I have hope. Sometimes when the doctors and nurses talk to you, they give you hope," said the 52-year-old. "This hospital is very good and the staff is very helpful."

The IAEA contributed to the design of the facility, arranged training for medical professionals, assisted in the establishment of radiation protection measures for patients and staff and even helped the Government secure a loan to finance the project.

"Without the assistance of the IAEA, it would have been very difficult for us to set up a highly technical centre like this one and care for so many patients," said Lewis Banda, the CDH's Senior Medical Superintendent.

The IAEA still plays an important role. It sends medical students from other African countries for two-year training programmes and continues to help the hospital acquire essential medical supplies.

The centre's two teletherapy machines administer 130 sessions of radiotherapy per day.  Two brachytherapy units treat the rising number of patients with cervical cancer, the commonest cancer in Zambian women. There are also mammography services for the early detection and diagnosis of breast cancer.

Cancer care in the rest of Zambia

Outside Lusaka, the situation for cancer patients is very different.

At the central hospital in Livingstone, in Southern Province, there are facilities to screen and make a clinical diagnosis of cancer, but there are no services to treat cancer or even analyse tissue samples.

Chief Surgeon Kelvin Moonga said: "We don't even have a pathologist here, so we need to send samples to Lusaka. It can take up to a year to get results back. Sometimes we lose patients because it just takes too long."

When faced with a cancer diagnosis in Livingstone, patients are told that they need to make the seven-hour journey to Lusaka, at their own cost and often without their families and friends. "We tell patients the cancer treatment is free, but you have to get to Lusaka. They have to make multiple visits for treatment. This is expensive and most of our patients can't afford it," said Moonga.

He added that many patients do not even start their treatment, while others do not finish it.

To cope with the chronic lack of cancer treatment facilities, the Zambian Ministry of Health has launched an ambitious project to expand services throughout the country.

The towns of Livingstone and Ndola have been designated as the locations for the first phase of the expansion plans. The IAEA will be helping Zambia to prepare for this expansion through expert advice and training.

"If we have a cancer treatment centre here in Livingstone, it will mean there are no travel costs for the patients," said Moonga. "It's these costs that sometimes stop them getting the treatment they need.  And if they have direct access to treatment, they'll be more motivated to seek it, before it's too late."