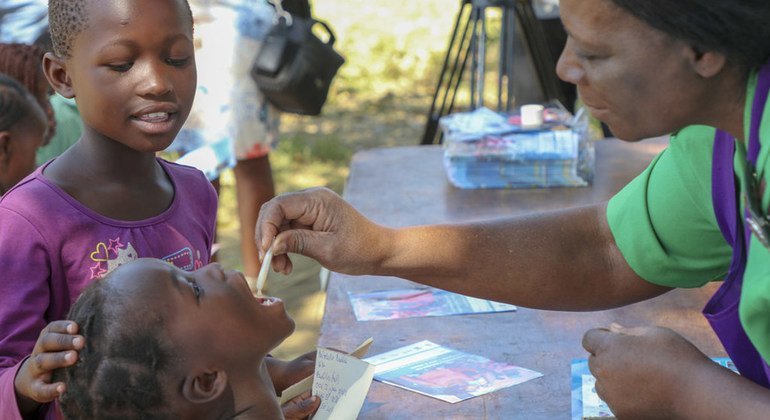 Glen View, a dense suburb vulnerable to cholera because of a lack of clean piped water, is at the epicentre of the outbreak. The UN humanitarian affairs office (OCHA), which is monitoring the situation, reported over 6.600 suspected cases in the three weeks since the disease first emerged, which has spread to at least five additional provinces.

The Zimbabwe Government announced a state of emergency on 11 September and, in a statement, WHO commended the Government for moving quickly to put key controls in place, providing clean water, promoting hygiene, cleaning blocked drains and setting up dedicated treatment centres.

The vaccines were sourced from the global stockpile, which is funded by Gavi, the Vaccine Alliance. Seth Barkley, CEO of Gavi, said that there is no reason why people should still be dying from the “horrific disease” of cholera, which can be prevented with clean water and sanitation, adding: “Gavi has worked hard to ensure the global cholera vaccine stockpile remains fully stocked and ready to help stop outbreaks such as this.”

He said the government of Zimbabwe had “done a great job in fighting this outbreak. We must now hope that these lifesaving vaccines can help to prevent any more needless deaths.”

600 health workers in Zimbabwe have been trained to carry out the vaccination campaign, with WHO supporting the Government on a rollout strategy, which will include making inoculations available at health facilities, schools and shopping centres.

WHO experts have also provided cholera supplies of oral rehydration salts, intravenous fluids and antibiotics sufficient to treat 6,000 people, and are helping the authorities to strengthen preventative measures.

Dr Matshidiso Moeti, WHO’s Regional Director for Africa, said: “we have a window of opportunity to strike back with the oral cholera vaccine now, which along with other efforts will help keep the current outbreak in check and may prevent it from spreading further into the country and becoming more difficult to control.”

The campaign will be rolled out in two rounds, focusing on the most heavily affected suburbs in Harare and Chitungwiza, which is 30 km southeast of the capital city. To ensure longer-term immunity to the population, a second dose of the vaccine will be offered at a later date.

Cholera frequently hits Zimbabwe: the most serious recent outbreak was in August 2008, lasting for 9 months and claiming more than 4000 lives.

Hackers Used SolarWinds’ Dominance Against It in Sprawling Spy Campaign

WASHINGTON – On an earnings call two months ago, SolarWinds Chief Executive Kevin Thompson touted how far the company had gone during his 11 years at the helm. There was not a database or an IT deployment model out there to which his Austin, Texas-base…

ABIDJAN – Trade between the United States and sub-Saharan Africa is in the doldrums despite a 2000 U..S law designed to boost access the American market, a conference in Ivory Coast has been told.The African Growth and Opportunity Act, which in 2015 wa…

US Exercise Focuses on Role of Police, Courts in West Africa Counterterrorism

About 80 law enforcement and judiciary officers participated in last week’s inaugural West Africa Joint Operations regional exercise — a small figure compared to the thousands of personnel who sometimes take part in military-led counterterrorism exercises. But this modest exercise could have a big impact against terrorism, said Julie Cabus, deputy assistant secretary and assistant […]